Listen to this Episode: Ptolus : Tales Under the Spire. Chapter 1 Part 1. Audiobook/Podcast/Reading

The city of Ptolus loomed huge before Vogh as she crossed the plains after exiting the mountain paths. The openness was a breath of fresh air, but after the covered protection of the mountain forest the feeling of vulnerability accompanied the freedom.

The caravan plodded along the road as the huge city grew larger before everyone. The entire group was drawn to stare at the gigantic, spike tower rising from the city going to impossible heights. 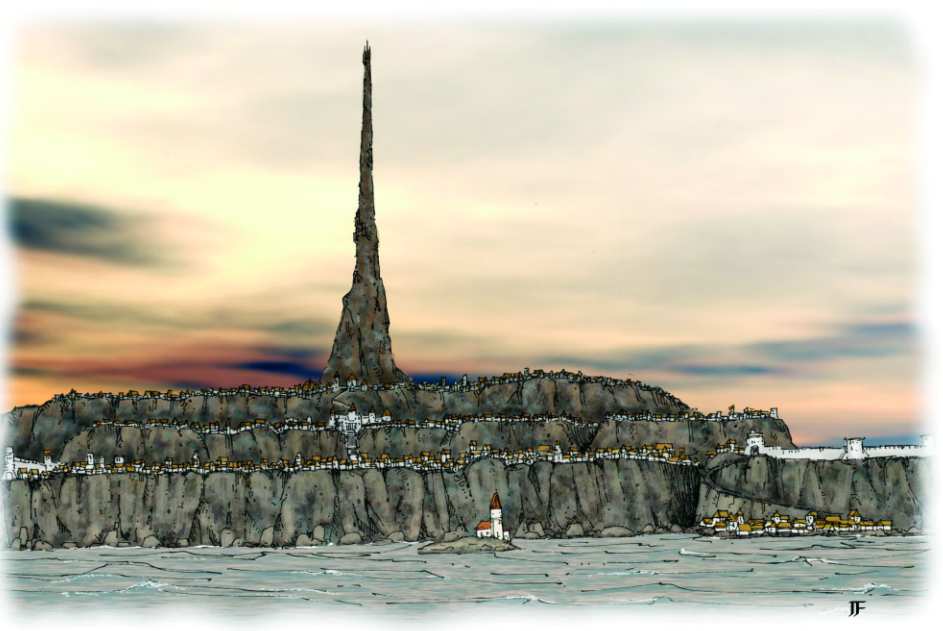 Tent City: Outside the Market Gate south of the South Market lay the so called Tent City, a haphazard collection of shacks, tents, and people sleeping, cooking, and living out in the open. These folks found Ptolus too confining, or the law inside the walls too limiting. Tent City was a dangerous place, particularly at night. 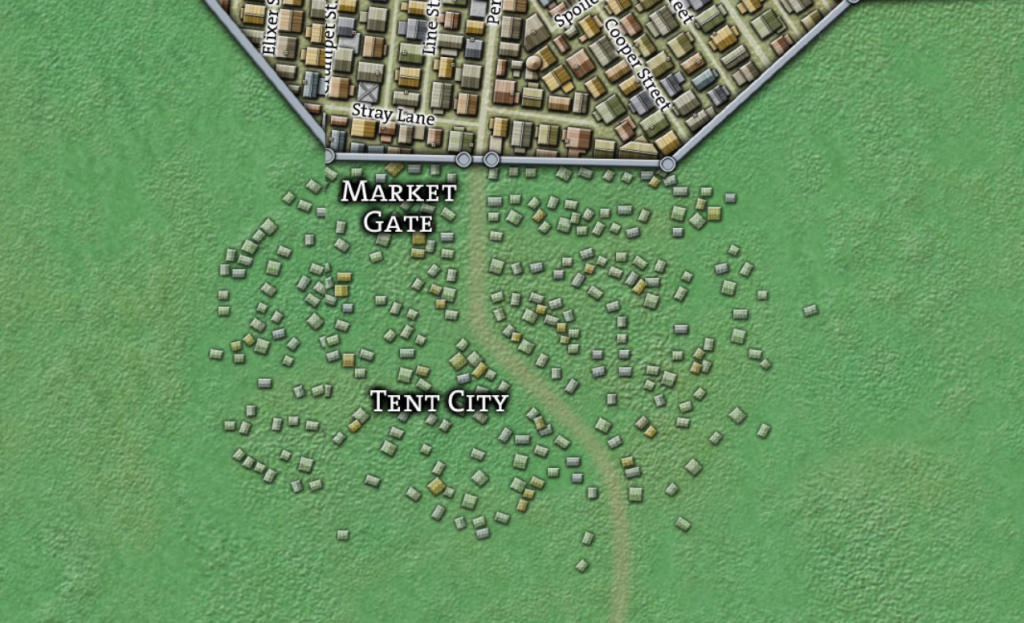 The midday sun beamed down as Vogh passed through tent city. Every manner of humanoid could be seen from the road as the group passed through. A large humanoid caught Vogh’s eye. With the head of a lion, but standing on two powerful legs, the lion-man was imposing to say the least.

She approached the massive Market Gate and passed uncontested through the wall into the city. Vogh passed through the incredibly crowded street, making her way down Penny Street to an open air area called Star Crossing Plaza.

The South Market was not an open-air marketplace. It had few vendors dealing out of carts with more established shops and places of business. Goods usually costed more in the South Market, but a buyer was far more likely to find trustworthy and reliable salespeople there.

It was also where one found the city’s commodities markets and the headquarters of large merchant organizations, such as the Rogue Moon Trading Company which Vogh was working for as a caravan guard.

Many of those who worked there also lived there. The district had substantial residential sections. The South Market was newer than the North Market and had more artisans and industry than its counterpart. You were more likely to get something made to order in the South Market, because the store selling leather goods, for example, wa probably also a leather worker’s shop (such as Donnel’s, a friendly dealer in leather goods).

Navaen Bowcraft was a fine place to buy bows or arrows, and those looking for a real treat should stop by Ramoro’s Bakery.

It had been about a year since Vogh last stepped foot inside Ptolus. She had been on a grand adventure to bolster her storytelling in the pubs about the town to earn a little coin. Not a lot had changed since she left though, the smell and the noise was still very prevalent in that part of the city. Looking up into the sky she could see that it might rain any time now, though luckily it was holding off for the time being. She really didn’t want to soil her clothing when she had just arrived. First impressions were long lasting in peoples’ minds.

Once the caravan had gotten to the edge of Star Crossing Plaza she bid farewell and collected her payment for aiding in the safe return of the goods she helped guard. Vogh had gathered a few special items along way and thought she should quickly make her way to the Exotic Market. After saying her goodbyes, she turned to her left and began walking down Center street, then finally left on Blackburn street. Vogh knew she would find the market abuzz at this time of day so she wanted to hurry.

Although technically a commodities market, the Exotic Market felt more like one of the North Market district’s marketplaces. There vendors sold one-of-a-kind items; imports from mysterious, far-off lands; miscellaneous magical trinkets brought in from elsewhere; and even odd, non-livestock animals.

The market consisted of a strange jumble of small wooden stalls, temporary tents, a few open-frame buildings, and even people selling out of the back of wagons. The market’s management was just as chaotic, and finding someone in charge could prove difficult.

But Vogh remembered the little gnome Inlios and his penchant for buying and selling the strange.

Once in the Exotic Market though, Vogh knew whom she would like to find there in the chaos that was the exotic market, Inlios. She only hoped the little gnome was about and not off exploring himself. She went to the place she remembered he liked to set up his little wagon to sell his goods.

Others were near his cart looking over the oddities and his keen eyes darted from his sales quarries to the browsers.

She gave a courtly nod to the gnome as he was explaining where he got the trinket. Vogh would wait till it sold and then pushed her way forward to wrap him in an embrace. Inlios my friend. Looks as if business was going well for you.

The little gnome’s speech ran together he spoke so fast.

He was excited over his sale and over seeing the beautiful woman.

Vogh nodded as the gnome talked. She smiled and said, I have been gone about a year. You seem to be doing well for yourself. What was that thing you just sold?

After listening to the answer she then said, Is there anything new that I should know about with the laws or anything?  Anyone I should get to know?  I will be visiting the Knights of course. Not many people knew that she was petitioning to become a member, though Inlios did.  Vogh had been found by House Kath when she was but a child and had trained her extensively with many forms of the arts.

The little gnome bounded down off his stool over beside someone eyeballing a shiny and gabbered with them for a moment. When they left empty handed he skipped back up and continued speaking with Vogh.

Watching him complete his business with someone else quickly, Vogh put an object to mind and it appeared in her hand a she grabbed from her magical backpack. The object was a small glittering stone. As Inlios returned and happened to ask about any items she had, Vogh opened her hand to show him the glittering stone. I found this in a home of a rather paranoid man that was wanted for murder. I have identified it as a glitter stone. When you throw it on the ground it shatters and fills the area with dust. It was much like the spell after which it was named.

The little gnome smiled as big as he could and tilted his head waiting for Vogh’s response.

Vogh smiled back at the gnome, knowing he might be able to sell the thing for even more than 450 gold, but she hadn’t seen him in a while and was willing to give him a tiny discount. How about 400 gold and I treat you for dinner this evening?

Then he hoped down and away to another customer handling a few trinkets.