When Vogh returned to Inlios she pretends to buy something to get him in conversation.  She throws in keys words to let him know it is her speaking.  She will then tell him to listen to every third word as she talks.  The message will be after all done.

Inlios haggles a little over price until the disguised Vogh backs down and walks away without spending any money.

Vogh chose a seat in the corner of the establishment so he could keep an eye on the whole place. 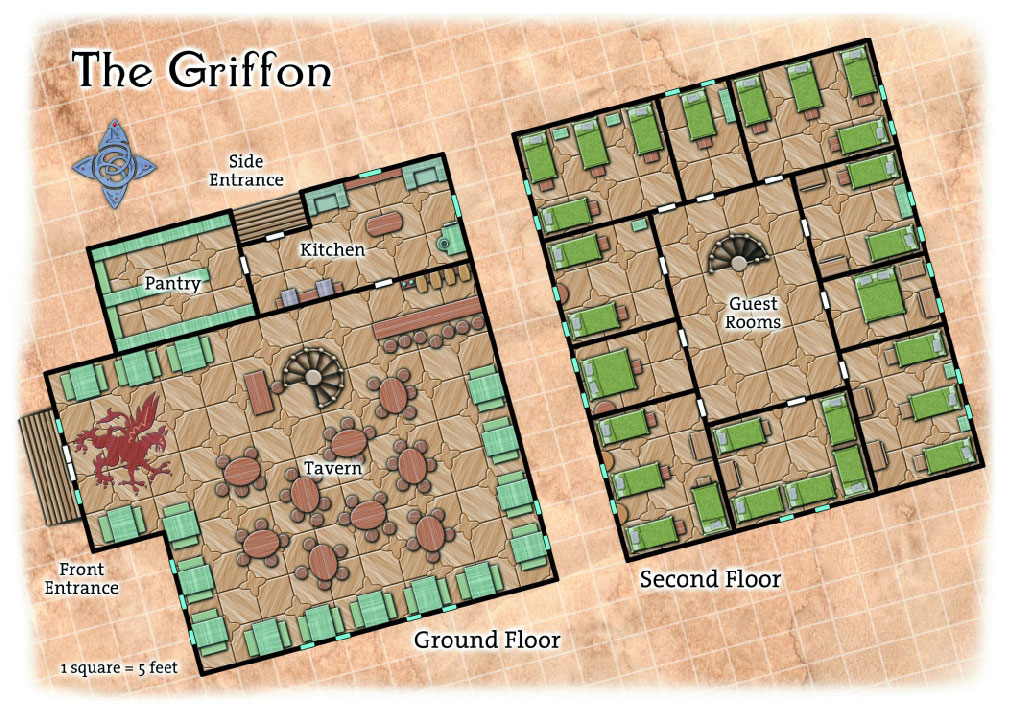 Another mainstay of Tavern Row, the Griffon is both a tavern and an inn. One can identify this two-story building easily by the large mural of a rearing griffon painted on one wall. The tavern, its kitchen, and a pantry comprise the entire lower floor of the Griffon, while the upper floor has ten rooms to let. The tavern offers food, mainly just whatever is cooking over the fire that night (occasionally a roasting pig or a flank of beef, but usually a big pot of lamb or beef stew) as well as a few other dishes: a plate of bread, cheese and a little fruit, a plate of fried potatoes and onions in gravy, or a cooked meat pie.

The Griffon, which caters to the common folk, enjoys a reputation as a friendly, safe place to drink or eat. It avoids the sinister associations of such places as the Onyx Spider and the adventurous nature of establishments like the Ghostly Minstrel. Nella Schaun is the manager of the Griffon. The tavern is full to bursting every night, with most rooms filled as well.

Vogh is able to find a booth table in the corner as the place hasn’t started to fill up yet.

Is Vogh showing as herself, or still in her disguise?

When Inlios walks in, Vogh waved him over to her table which already had his favorite drink and also a nice sweet elven wine filled glass for herself.  Vogh had also placed the order for two plates of the house special for the evening.

When he sat Vogh looked over to him and asked, so how was the rest of your day?

He is visibly shaken as he grips the table standing the chair.

Anyone making and selling magic items in Ptolus seemed to disappear. The Dreaming Apothecary organization had a monopoly on selling new made magic items. Several places, like Myraeth Tuneweaver – owner of Myraeth’s Odities – were allowed to sell items which they simply purchased from others. The Delver’s going beneath the city found a lot of things which they sold and no one seemed to have an issue with that.

He had never heard of Sala when Vogh gave the name of the woman who wanted to hire her.

When she leaves the place she strolls on over to the Ghostly Minstrel and seek out Tellith.