Vogh has quite a distance to walk, and the sun has faded fast to barely an orange glow on the horizon. But she makes it to the famous Delver’s Square and enters the Ghostly Minstrel. 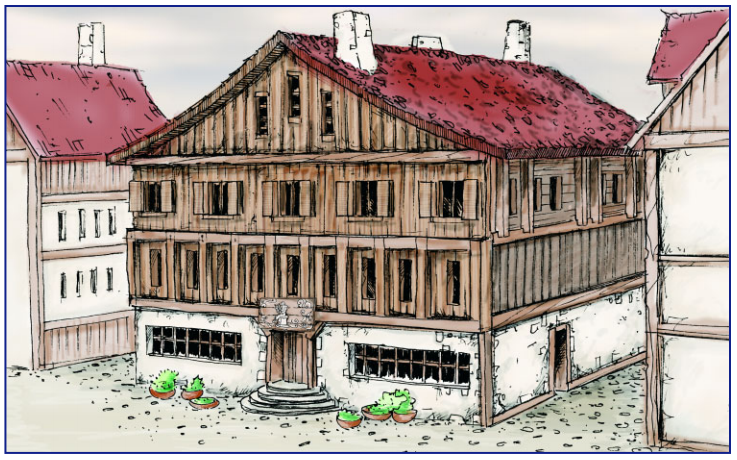 An inn, a pub, and a restaurant all in one, the Ghostly Minstrel is the adventurer’s meeting place of choice. It has earned a reputation as the central feature of Delver’s Square and the focal point in the world of the delvers who plumb the depths below the city.

On its second and third floors, the inn has a total of thirty guest rooms. A night’s stay at the Ghostly Minstrel costs either 5 sp, 7 sp, 1 gp, or 2 gp, depending on the room’s size and location. Keeping a horse overnight in the stables behind the inn costs an additional 5 sp.

Tellith, a pretty young woman with reddish-brown hair is working the front desk when Vogh enters.

Striding into the pub Vogh moved with finesse to the counter where the woman awaited her.  Excuse me miss I am here seeking someone about a job.  Who would I need to talk to?

Tonight is no exception. The tables and booths are all packed.

Tellith says they do have a room available but Vogh must pay for the night ahead of time because there is so much demand.

She goes to the front most table and speaks quickly to the patrons there, a human man and woman. Vogh sees the red haired woman drop a throne on their table and they happily give up their seat and head through the crowd to the bar. Now the beautiful woman has the table all to herself.

Many of the patrons longer into the drink than others are singing along loudly.

Most everyone is having a good time.

The Bard occasionally does a hand flourish and throws Sparks into the air, or produces a flower to hand to a beautiful lass that disappears into the air.

Vogh at one point even tossed Talin quite the smile and a lick of her lips as he had made eye contact with her.  She was in disguise, but it was one of a pretty young lassie.  Her hair not the stark black as before, was now a playful blonde with curls.  Her attire was that of a high class, but not noble though as that would be hard to copy and play off.

Everyone was clapping along to the fast tunes Talin was strumming out and watched both he and the conjured images.

A handful of couples stood and joined the illusions in playful dance and the whole crowd was roaring with laughter, clapping and music.

As the night wore on Talin slowed down the pace and brought the volume down. He seamlessly switched to a small harp and his fingers make the strings twinkle.

The room was filled with a calming air that lifted everyone’s spirits and lightened their hearts.

Many headed upstairs to rooms and others left for home. A few had to be roused from their tables and politely helped upstairs or outside.

As the middle of the night approached the common room emptied.

That was some fine playing Talin.  She said to the man as he strummed on the harp softly.  What did you think of the dancers that joined in the merriment?  I thought it was a nice touch.

He carefully packs away his instruments as he speaks to Vogh.

You’re the last to leave pretty. What has you staying so late?

He flashes that impossibly charming smile at her as he finishes his packing and stands addressing Vogh.

He lifts his hand and asks for another bottle of the same wine Vogh had sitting on the table. He accepted that and two glasses and followed Vogh where she led.

“Vogh…? I haven’t seen you in years…” He chuckles out loud “Why the disguise?”

This would be the fade to black moment……

Where are you off to on your next adventure?  I just returned myself after a year away from Ptolus.

He watches Vogh dress with a smile that didn’t leave his face.

Greetings again.  I was talking with Talin and I brought up a name to him to see if he knew it.  He didn’t, but I thought you might help me.  I am looking for a woman by the name of Sala.

As for staying, I will not sorry, but thank you for your hospitality.  Vogh stated and then left the premises.

ooc: Is there a place by that I can spy on this establishment easily?

There are tons of buildings and hiding locations. You’ll have to be more specific. big city! 🙂 Do you want someplace you can stick to for hours or days on end?

Are you going to update Bloodstone game?  Not sure if it is your turn or not.  Was just wondering.

The easiest way for you to spy would be adopt yet another disguise and just hang out in the inn/tavern common room.

Bloodstone: We’re waiting on other players but I can update for them if I have to. Let me check on it.

Also you are right, it is others turn!!  I checked after I typed.