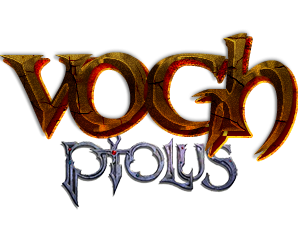 You can read the Play by Post Threads of the entire Vogh Game here : https://ptol.us/category/campaigns/vogh/

Vogh arrived back to Ptolus working for Rogue Moon

Met Tellith at the Ghostly Minstrel Inn and got a room there.

Vogh hooked up with Talin

Took him to meet her family

Ilsandrin was their first protection against the crazed fan, Samlin.
Talin threatened to kill Ils. in front of Samlin, then kill him.

Killed Toridan Cran and his wizard, but spared Guun, the hired muscle. Found Cran’s ledger and turned it over to the City Watch.

Joined the Delver’s Guild and went to Welcome Inn to meet Juel, Chule, Sam and O? to go on a Ratman Nest raid.

Met both Reggy the Full-ling and Bristol (which they didn’t know at the time).

Abhoth, a map and a mysteriously scrawled note referring to “Abhoth, Source of All Uncleanliness, who slumbers deep below with the others.”

Vogh posted a notice in the Delver’s Guild Headquarters in the Undercity:

If interested please ask for Vogh and Talin at the Ghostly Minstrel.

Vogh and Talin went to visit Brother Fabitor to inquire about a cleric/priest to accompany them. Fabitor told them Abhoth was one of the Lords of Chaos, sealed long ago, and said none of the Lothian priests would want to ‘adventure.’

Vogh met Bharash the dragonborn and cleaned his armor for no reason. They would meet up much later.

Sallina warned Vogh that that marrying Talin would mean she was no longer of House Kath.

Raule told Vogh that Abhoth was one of the Galchutt.

They visited the Undercity, Delver’s Guild Headquarters looking for jobs. They also learned about ex-delvers and retired individuals often sold their used equipment in the Undercity.

They also viewed the Wall of the Lost where people posted notices about missing loved ones.

They found a posting about retrieving missing items and went to see Dularius Mul.

They met Mul at the Red Stallion Pub.

Bards hired Adam Eustice to help them traverse the Mirror Maze which allowed access to the dungeons.

Dularius Mul, drow, the bards retrieved a magic item from a dead dwarf, Dolmyr Brighttoe, a rod of Metal and Mineral Detection. Triss was in a dungeon designed to learn how the lesser races think and fight. Her mistress is the drow female from the Queen of Darkness module. They helped her escape as she was imprisoned there too.

Encountered Sorn-Ulth orcs. They have skin as black as pitch and beady white bulbous eyes. Their faces look more human than those of other orcs, but they are still bestial. Most walk hunched over. Orcs trapped a deep gnome and ambushed the bards. They killed several but a sorcerer orc escaped.

Visited Danbury’s and got Coins to order their Healing Belts from the Dreaming Apothecary.

Met Iltumar Shon at The Bull and Bear Armory.

They saw Delemele, a priestess of Melann the Goddess of Farming crying and helped her recover the Sacred Wafers. Visited the Gatehouse Pub. Talin visited Rivergate for the first time. Visited Finelle’s Pleasant Diversions seeking info, where they were attacked by Shoal Elf. Delemele nearly died from the arrow, Vogh saved her life.

The shoal elf nearly died, but Talin healed him and turned over to the City Watch after he ratted out Thord Questin, a dwarven, ex-cleric of Melann. They apprehended Thord in Deaven Park. Delemele offered them assistance anytime.

They sold weapons to Rastor the Litorian.

Vogh changed armor and sold some. Iltumar got them a good deal.

They went to Star Crossing Plaza to inquire after Jessie Thorton at The Rogue Moon Trading Company about transporting magic items for goblins outside the city. Lipthsu was the goblin leader.

Bards inquired after Rumors of Blue Gnolls in the Guildsman District at the Skull and Sword, likely the roughest bar in Ptolus.

Wine from Vladaam taken to Korben

Other items sold from Vladaam estate

Lineche Cran likely a vampire now and hunting the group

Covenant of the Blood has the demon watch and are still interested in Linele because of how the watch turned her.

Killraven is aligned with Pactlords

Pactlords have headquarters in eternity cave.

Iltumar and his bad friends

Helmut Itlestein isn’t lying about not knowing about his involvement in the attack on Phon. He had a bard friend change his memories.

Chapter 2: Delving msg #487 I never answered Vogh about the haunting