A Day in the Life of a Ratman

Home/Homebrew/A Day in the Life of a Ratman

A Day in the Life of a Ratman 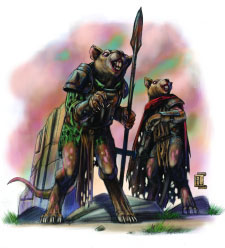 The average ratkin is born as one of a large litter in what their mother considers a comparatively ‘safe’ part of the sewer tunnels beneath Ptolus. By the time they’re adults (which takes shockingly little time) they will have lost the majority of their siblings to disease, starvation, predation and the depredations of adventurers against whom they are often thrown as disposable shock troops by other, more powerful denizens of the undercity.

Most ratkin have learned to speak the common tongue, albeit rarely at a level beyond that of a human child. Other skills, beyond those of rudimentary combat and scavenging are difficult, bordering upon the impossible for them to acquire both due to a lack of opportunity and time – the business of survival in the hellish darkness beneath Ptolus is a full-time affair, providing little opportunity for continuity of culture or any profession not immediately concerned with locating food, water and safety. Functionally speaking, what passes for ratkin society is more akin to that of hunter-gatherers than the day to day lives of the humans of the city above, albeit conducted at ruinous population pressure. Any skill which requires free time, training or leisure to develop is simply unavailable to them as a society.

It is unusual for a ratkin to reach double-digits in age. It is all but unheard of for one to reach their twenties. Their theoretical maximum age is unknown.

Their main sources of water are drains, sewers, gutters (for those ratkin communities near the surface) and the King’s River. Some fortunate ratkin nests have ‘tapped’ wells in the city by boring into them below ground level and lowering crude leather buckets to the water below.

The main food sources of the ratkin are human trash (the best pickings of which are to be found by risking the surface), hunting sewer creatures such as rats and vermin (a task as likely to result in becoming prey as finding any), stolen food (even riskier than scavenging human refuse piles) and of course, raiding (which includes cemetaries, perhaps the most dangerous of all since it puts the ratkin in direct competition with ghouls). Cannibalism and the consumption of intelligent humanoids is of course, common albeit largely (but not entirely) as a result of simple hunger. 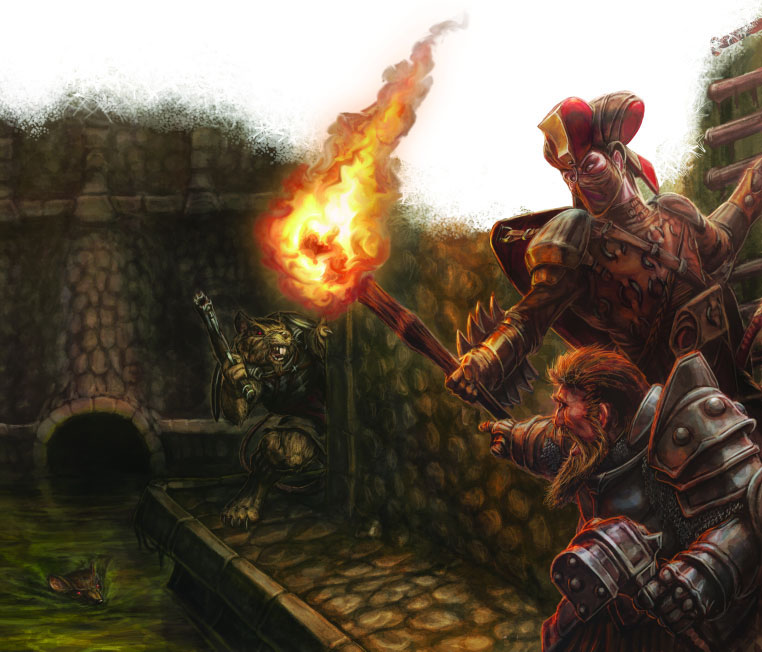 Equipment for the average ratkin is whatever can be found, scavenged or stolen. Armour to fit their usually small frames is almost impossible for them to secure and so ragged fabric stuffed into ill-fitted garments or shredded leather with crude scrap lashed to it is not uncommon. Weapons, similarly are found rather than made, ranging from thrown cobblestones and bricks to stolen and painstakingly-honed kitchen knives afixed to broom handles or cudgels. Ownership of a real weapon could easily turn a fortunate ratkin into the leader of its pack.

Working for other, more powerful monsters or organised groups provides ratkin with opportunities they otherwise lack, such as better access to clean(er) food and water, real weapons and even armour – if only taken from the corpses of unfortunate delvers or the destruction of weaker ratkin groups without the benefit of their patronage. 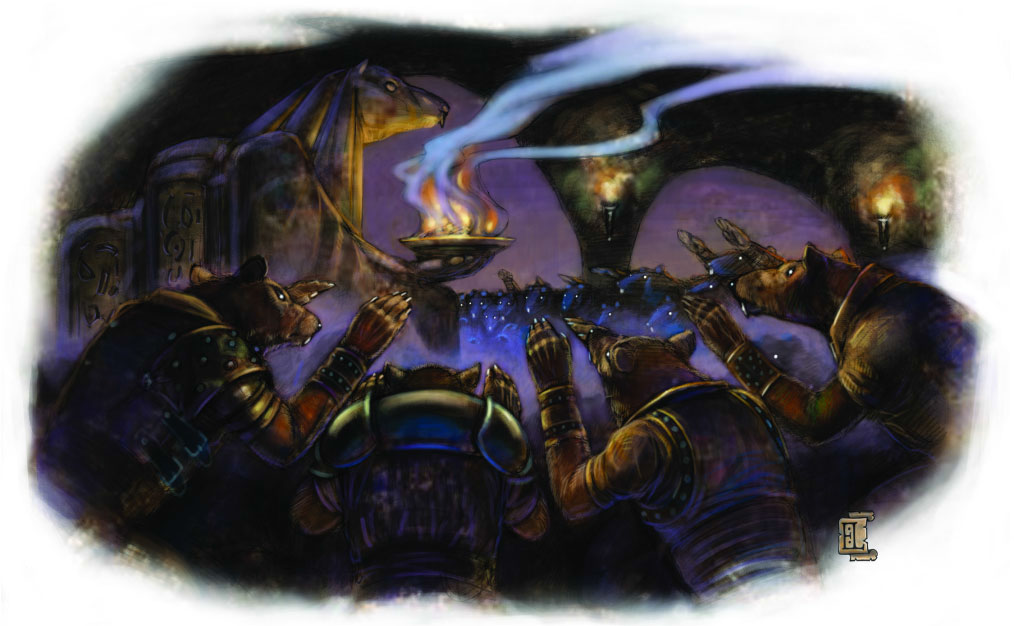 Rats and Ratlings worshiping at Temple of the Rat God

Ratkin are, as a rule chaotic and selfish. Any instinct towards altruism dies of hunger in the dark while any organisation beyond the rule of the momentarily strong is shattered by short lives and a tainted environment. Theft, murder, cannibalism are all embraced without thought because those actions are how one avoids being stolen from, killed and eaten. Fear motivates their every action from their earliest years and it is vanishingly unlikely that they have the concept of hope.

For role-playing purposes beyond ‘you see a room in which there are 2D6 ratmen, roll for initiative’ consider the trope of feral street children in the deepest part of the worst city slum, then add an insoluable racial barrier to their ever escaping their birth. The ratkin are, on the whole exactly the monsters that low-level adventurers should feel little shame in carving through; filthy and stinking, gleaming eyes clutching rusting weapons in the dark and falling upon helpless prey in chittering swarms, cowards who flee from bright lights and battle-cries. Very few will ever stop to ask themselves how they got that way.

She has a brown eyes, and mottled brown and black fur. She stands 162cm (5’3″) tall and with a skinny build. She gestures profusely during a conversation. Catrain is always polite and respectful as she has no self-confidence and will not challenge anyone other than lesser ratmen, whom follow her as she has a far greater command of the Common language than any of her tribe, and can even read a little bit, but she has no concept of propriety.

He has blue eyes which are constantaly squinting and contrast with his burnt-orange fur that makes him look like he rolled in rust dust. Three Eagles is tall and broad by ratfolk standards, but not so large as a ratbrute. He stands closer to six feet than five and easily weighs 150 pounds with a strong musculature. Three Eagles gets bored easily and is typically spoiling for a fight with any ratman, but never Delvers. He is very self-confident among his own race, but shies away from Adventurers and will only fight them if cornered. However, he will fight with fervor and with a small measure of skill by ratman standards. He wields a dented short sword and wears cobbled together leather armor with a single, metal shoulder cover. These acoutraments, and his skill, make him a leader among the ratmfolk warriors. When asked about his name, he explains that he once killed three eagles; however, he holds up all 5 fingers when telling this. He is also commpletely illiterate.

Nelaser is the oldest raman of the group, and reveared by all the others. He has short and curley hair which is mostly blonde and sports raven black eyes. He is short for a ratman male, but his coniving and backstabing ways have kept him alive longer than most ratmen survive. On one arm he keeps a patch of skin shaved which sports a tattoo of runes no one knows what they mean. He claims an ancient shaman blessed him with the runes and that they contain a spell which will kill anyone who slays him. Nelaser often laughs at inappropriate times. He is very conceited but always has a backup plan. Because of his age, he is considered an “elder” of the group and most defer to him.