Sold by the good folks at Shadow Sendings these Shadow Ravens come in two versions. 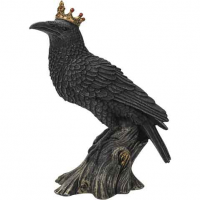 Home Raven: The first version is pictured here, which is a black raven sitting atop a branch which is about the size of a volleyball with a slot in its back. There are two versions of the Home Raven, 250gp Audio Only and 500gp Visual and Audio.

Portable Raven: The second version is a handheld metallic rectangle with a slot on the top. There are two versions of the Portable Raven, 1,000gp Audio Only and 5,000gp Visual and Audio.

When gold coins are deposited into the slot, they are magically transported to the Shadow Spendings office then the “Raven” vibrates lightly, letting the wielder know it’s ready to receive an audio or video recording to issue a Shadow Sending.

The items are sold to individuals who would rather not travel to the Shadow Sending office to send messages. Any messages ordered still fly out of the Shadow Sendings office on the hour, every hour, and have the same cost per message. Messages can still only be sent to beings inside Ptolus.

Read about Shadow Sendings in the Flow of Information.

This homebrew Ptolus creation came from Dastran on the Ptolus Discord.