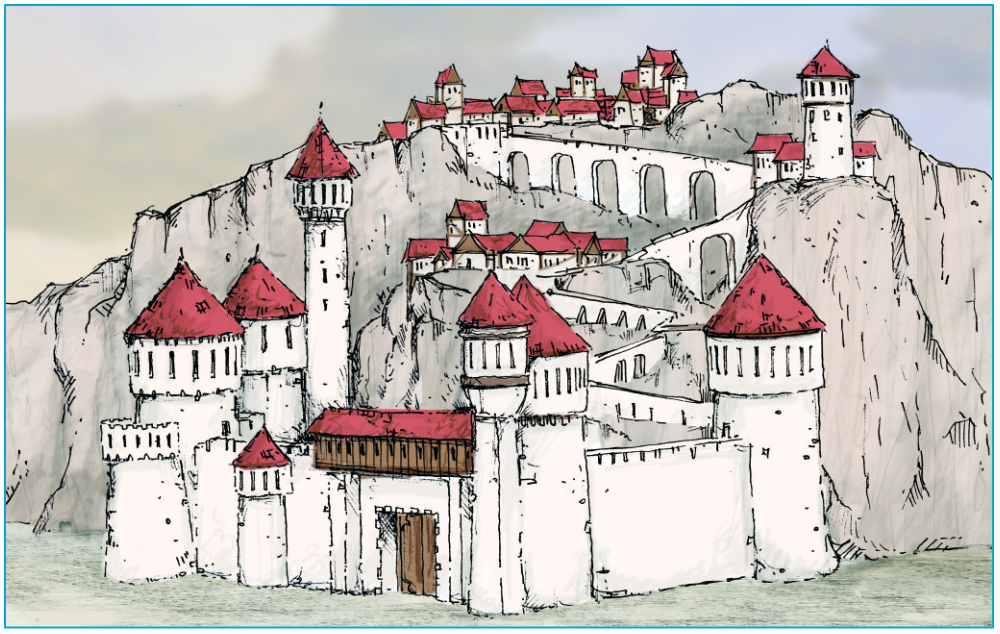 According to the Timeline construction of Dalenguard was started only 7 years after the destruction of Ghul by the Great Seven.  So I thought what if during the construction of Dalengaurd they built a secret vault within its very thick walls to house artifacts left over from that conflict.  This is how the Dalenguard Vault was born.  In my game, the PCs were hunting down an artifact I created called the Immaculate Pearl.  They came across an old letter that indicated it was in a Dalenguard Vault, and with some trips to a couple library’s figured out where it might be.

Built into one of the walls of Dalengaurd is a small forgotten fountain.  The 2-foot-tall basin of this fountain comes out from the wall about 3 feet in a half-circle shape.  Above the basin on the wall is a carving of the Great Seven.  Above the Carving is an inscription that reads “Dedicated to the Great Seven who destroyed Ghul. May Gaen’s light always shine within them.” The fountain is full but has not been maintained in while, and various bits of leaves and plant matter reside in its water.  If the debris in the basin is removed you can make out seems in the bottom of the fountain. a half circle coming out from the wall with straight lines coming out, resembling rays of the sun.

The fountain is the entrance to the vault.  To open the vault, the players must place a holy symbol of Gaen into the pool, and say a prayer to Gaen.  Once done the holy symbol will start to glow, the water will drain from the basin and the wedges of concrete between is seem at the bottom of the well, start to lower, forming a spiral staircase.

Once the players descend the stairs they find themselves in a hallway that terminates in a grand stone double door.  On the door is a massive carving.

The door depicts, a skull-headed warrior waving his hand in a broad motion In front of him. Before him stand what is clearly The Great Seven, Dionys a human wielding a scythe-sword, Kam a halfling with fists clenched, Eriskal an elf with a rapier held at the ready, Runshallot a bald human glowing with the light of Gaen, Saerth an Elf with a small Dragon perched on her shoulder, Uthegos a dwarf hefting his war ax, Yllistroa Half-elf with arrow drawn. From the skull-headed warrior’s hand comes seven projectiles one for each hero. Towards Dionys a ball of burning flame, Kam a blast of water, Eriskal a fog of deadly gas, Runshallot a black skull trailing green smoke, Saerth a lance of ice, Uthegos a wave of pure darkness, and Yllistroa a thin green ray.

Above the door is an inscription:

“Ghul had command of all the elements those natural and those unholy, and he unleashed them on the seven.  However, the Seven were prepared, they had counters for them all, they used those counters to kill him, all except one, who fell to dust.”

The door is not locked.  Once pushed open the players find themselves in a large open room with 2 large constructs in the middle of the room, and a floor with tiles covered in symbols 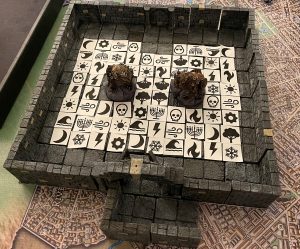 On the other side of the room is a dais with a large metal bowl on it, and a door.  The door depicts a figure being formed out of dust.  The features of the figure are unclear. Above the door is the inscription.

“…but Runshallot called to Gaen and with his light was able to bring their fallen friend back.”

This puzzle has a lot going on and can confuse your players. The Key is in the inscription, the Heroes found counters to Ghuls Spells spells and thus they must step on tiles that are in order of those counters.   You can edit the description of the image to include whatever spells you like or whatever tokens you have that fit best for counters.

The Spells with counters I had are listed below:

So the Path would be as follows 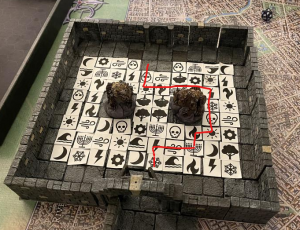 According to the description, one of the heroes die, however, it is not told which one dies, or to what.  (when my players were searching for the vault one of my players went to the library and asked to look up the Great Seven, they rolled well on the investigation roll and learned about the battle and that Yllistroa was turned to dust but Runshallot was able to bring her back.  This gave them a leg up on the key and didn’t even know it at the time)

The puzzle has a couple of missteps baked in early.  One might quickly assume Water Counters Fire, instead of Ice, and it is a hard leap to think that Lighting counters water. However, the inscription does read “they used those counters to kill him” so the idea was Ice and Lightning were more offensive answers.

Also on the floor are a few tiles that are bogus and unrelated to the puzzle but they all “do something.

If the players step on the correct tile, nothing happens. (Except for the Skull tile it always goes off) But the first time they step on the wrong tile the constructs come to life and will attack the PCs.  (use whatever level-dependent CL constructs you want… I had clockwork Owlbears) .

These effects occur if you start your turn on one of these tiles or the first time you step on of these types on your turn.  Effects like water in the lungs and Magical darkness persist until the start of your next turn.

The inscription above the door is important.

“…but Runshallot called to Gaen and with his light was able to bring their fallen friend back.”

The reason the Skull tile always goes off is it disintegrates anyone that fails the save.   A disintegrated player is needed to open the door. The party must gather their ashes and place them in the bowl.  Then the bowl will start to glow very brightly, and with a flash, the player will be restored to life with full hp.  Once that occurs the door will open.

I designed this location to be old and not easy.  I also wanted risk and sacrifice to be involved.  I wanted the puzzles to tie into Ptolus lore.  Doing that makes the puzzle mean something more.  Granted the depiction of Ghul facing off with the Great Seven is my creation and Yllistroa being disintegrated and brought back is something I came up with, but it is a good story and hit some themes I wanted to bring into my game.

Not having a character in the party that worshiped Gaen they had to learn who he was and acquire a holy symbol of him.  Also putting the entrance to the vault inside Dalengaurd meant they had to deal with the guards to get in.  Convince them they had a purpose to be there, it allowed me also to tax the non-citizen residents, and it made the paranoid artificer leave his unlicensed guns at home, or find a way to sneak them in.  It also allowed me to have the commissioner scene as described in the Ptolus Book in the Dalengaurd Section.

Disintegration is a nasty trap for lower-level characters.  My party at the time was only 3rd level so there is no way they could come back from being Disintegrated.  I wanted it to be a scary thought.  The description indicated they would be brought back, but alas, willingly getting yourself disintegrated when you don’t know for sure is scary.  I wanted this to be a good character RP moment, for the party as they try to figure out what they should do, and then who would actually go through with it, if someone didn’t accidentally get disintegrated during the puzzle.

How does the party find out about this vault?  What are they looking for?  What is inside?  All that can be up to you.  They can find some Lore Magica items, some minor magic items, or find it has already been ransacked.  I actually went with the latter.  They found a wall to the vault already caved in and a cavern where Ratfolk were carting away goodies. (this happened recently which I foreshadowed by having workers in Oldtown talk about the ground-shaking days ago)  They were able to intercept one cart kill the rats and get some good, level-appropriate items, and find the Maguffin, but cleared they missed the big stuff.  (which is great foreshadowing for later)

About the Author: Andrew Cady