Rhodintor are creations of the Galchutt. Known as “earthbound demons,” they are not outsiders or true demons at all. However, the distinction is virtually academic – they are every bit as devious, conniving, and brutal as actual demons. 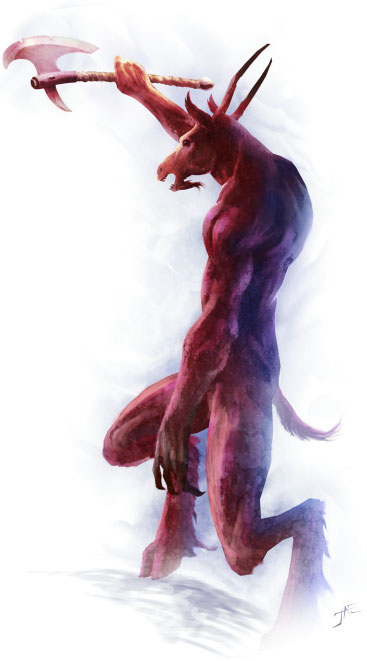 Rhodintor are tall, wiry humanoids with lean, muscular bodies. Their heads are long and angular, topped with ramlike horns. Their legs bend backwards and end in cloven hooves.

The Galchutt created the rhodintor to be extremely intelligent and possessed of a powerful affinity for arcane magic. These stewards of the Galchutt’s legacy are responsible for ensuring that the Night of Dissolution comes to pass.

In their pursuit of magic, the rhodintor take two paths. The first is called the Kravren. The individuals that adopt this course possess magical abilities that enhance them physically and make them greater combatants. The second is called Sarycal, and those rhodintor have more traditional magical abilities. Although the statistics here assume that the rhodintor use battle axes and shields, some who follow the Sarycal path use staves made of solidified fire.

There are no physical or intellectual differences between rhodintor who choose different paths; any group of rhodintor is likely to have followers of both.

These “earthbound demons” have no leaders among themselves but do consider themselves superior to all other creatures except the Galchutt. For creatures of chaos, they work well together—all the better to serve their masters and their dread goal.

Rhodintor do not procreate. They are only creations of the Galchutt. Thus, despite their chaotic nature, they do not throw their lives away recklessly.

Rhodintor love combat, as they thrive on strife, pain, and suffering. If possible, a follower of the Kravren path casts its spells upon itself before going into a fight, in particular bull’s strength and shield. They do not hesitate to pause in the middle of a battle to use a spell-like ability if it will help them. The rhodintor who follow Sarycal rely mainly on their spell-like abilities in combat. In a mixed group, the Sarycal followers use their lightning bolts and magic missiles to cover their Kravren allies while they cast spells on themselves.

Arcane Aura (Sp): Rhodintor have mage armor active at all times. This effect can be dispelled, but they can simply renew it as a standard action. Caster level 8th.

Some rhodintor carry staves of solidified fire. These +1 flaming staves allow the wielder to cast either fire shield or wall of fire once per day. A rhodintor can also use this staff to create a sixty-foot cone of fire that inflicts 8d6 points of fire damage (as cone of cold, but with fire), but doing so expends one of their once-per-day spell-like abilities. Anyone other than a rhodintor who attempts to use or wield one of these staves causes it to explode in a twenty-foot-radius fireball that deals 6d6 points of damage.

A rhodintor’s favored class is sorcerer. A rare few followers of Kravren may take class levels of barbarian or fighter.

Encounter rhodintor in the Vaults of the Rhodintor (page 453) and in the Undercity beneath the White House (page 334), as well as in the Night of Dissolution adventure (see CD-Rom).

The rhodintor believe the Galchutt can accomplish their goal of destroying the world only by first destroying the lost Dreaming City of Dreta Phantas (page 457).