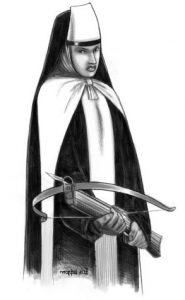 Founded in Ptolus more than two hundred years ago, an all-female order calling itself the Sisterhood of Silence established itself as a major force for law and defense. While the order has since spread to other cities, the Priory of Introspection in Ptolus remains the central headquarters of the entire Sisterhood.

As their name suggests, the Sisters of Silence do not speak. Instead, they employ a cadre of devout eunuchs to speak for them. Among themselves, they use a complex set of signs, postures, and expressions to convey vast amounts of information quickly.